I walked with a bent…until He touched me 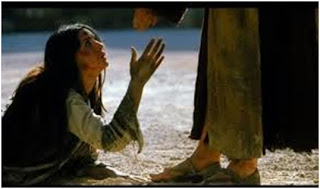 I had eyes, but could not see the sky. I could talk with people, but could not see much beyond their feet…I was abandoned by many as ‘a crippled woman’. For 18 long and peak years of my life, I walked with a double bent, a condition where the top half of my body was bent downwards with my head close to my knees.

None bothered, none understood until this Sabbath, when He touched me.

He was the talk of the town in the whole of Israel. Nazareth, Samaria, Bethany, Capernaum— all were abuzz with His teachings and the wonders He performed. I came to know that the Rabbi would be speaking at a nearby synagogue on Sabbath and I felt as if something in my Spirit leaped from within. I may not be able to see him, but I was so desperate to hear him.

Then came the day of Sabbath. As was the Jewish ritual for women to occupy the rear seats in the synagogue, I somehow managed to a get a seat behind. Oh, I could hear the Rabbi speak. It sounded so unlike the teachers of law, as if all the love in this world was contained in His words–such warmth, such power, and so filled with life. I could hear the whispers of women who sat in front of me, “He is Jesus, the Son of God.” I wrestled to catch a glimpse of His face, but my infirmity, and the awkward glares of people around me prevented me to do so.

Slowly His voice became louder, as if He was drawing near. And then, there was silence for a brief moment. He seemed to be calling out for someone. I could sense as if all eyes were on me. Was He calling me? Maybe not! Did I forget I was bent, how could He possibly even see me?

But indeed, He was calling me forward. Amidst such well-schooled and religious people, why would the Rabbi call me? But I sensed a drawing to His voice, and with my bent, I walked towards Him.

I could see his feet. How beautiful they looked—unlike any my eyes had seen before. For a crippled woman, who has almost all her life observed only the feet of people, I know what I am saying. Down at his feet, seemed to be the most high place of regard. As if, those feet were waiting to walk right into my life!

Is He indeed the Son of God? Oh, how I wished I could see His face once. And then, something amazing happened. He put his hands on me and said, “You are set free from your infirmity.” Immediately, I could hear my bones crackle. I sensed an overwhelming warmth in my back and after 18 years, I STRAIGHTENED UP. All pain was gone! I was bound in my Spirit, but now I was set free. I saw Him face to face. Indeed, He was the Son of God, and all I could do was to praise Him.

SUBSCRIBE HERE to receive the new posts from Olivedose directly in your inbox!!